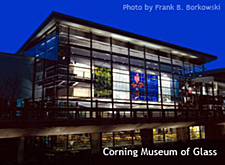 We were engaged to fill the shoes of the long-time, highly respected Director of Corning Museum of Glass. After that search was successfully completed, we were brought back to fill four senior curator positions.

These searches needed to bring the finest of the next generation of world-class experts in this very specialized field to the premiere institution internationally for the scholarship, interpretation and exhibition of glass.

While active research, sourcing and recruitment are essential in any search, we knew the best candidates would only be reached through the most extensive contact with our professional links and beyond. In each case, we were able to bring candidates with the highest level of talent and expertise to our client.

Opportunity Resources conducted an extensive international search for CMoG's director, bringing candidates from as far away as Australia to be interviewed by Corning's trustees. In the end, the successful candidate was Dr. Karol Wight, Curator of the Getty Museum’s Getty Villa in Malibu and a renowned specialist in ancient Roman glass. Karol was on the senior management team for the Getty Institute and directed operations at the Villa, where she had spent most of her career.

Kelly Conway, a nationally recognized specialist in nineteenth and early twentieth century American glass, was appointed Curator of American Glass. Kelly was the Carolyn and Richard Barry Curator of Glass at the Chrysler Museum of Art in Norfolk, VA. Kelly began at CMoG in August, 2013.

Susie Silbert was selected as Curator of Modern and Contemporary Glass. As an independent curator, writer and historian well known in the glass field, Silbert worked with institutions and arts organizations including Houston Center for Contemporary Craft, Museum of Fine Arts, Houston and the Metropolitan Museum of Art. Susie’s Master’s degree in Decorative Arts, Design History, and Material Culture is from Bard Graduate Center. Susie joined the Museum staff in April, 2016.

Christopher Maxwell arrived in October 2016 as Curator of European Glass. Christopher held positions in the Royal Collection, worked as an assistant curator in the ceramics and glass section of the Victoria & Albert Museum, and worked with a private dealer in the UK and the US prior to joining the Corning Museum. Christopher’s PhD is from the University of Glasgow in Scotland.

The Curator of Science and Technology, Dr. Marvin Bolt, brought an outstanding combination of world-renowned expertise in telescopes, scholarship in the philosophy of science, and enthusiastic hands-on interpretation of the concepts of science and technology for all audiences. Marvin began at CMoG in November, 2013. He came from the Adler Planetarium and Astronomy Museum in Chicago, where he was Curator of History of Astronomy and Vice President for Collections.